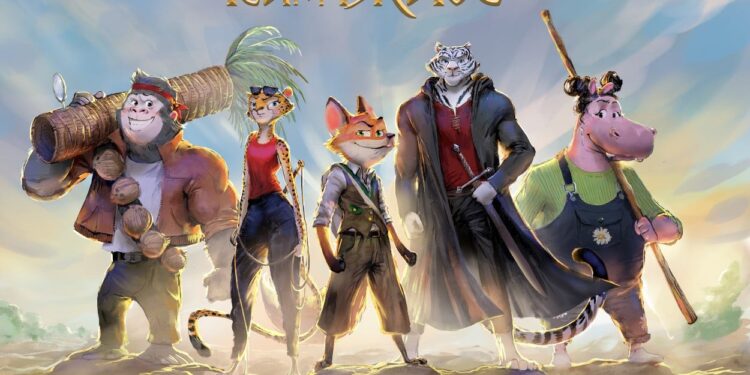 Brave Books said the permanent suspension of Facebook Ads by the Meta-owned social media platform was “a massive blow” for the publisher, which creates books for kids ages 4 to 12 that promote “pro-God, pro-America and anti-woke values.”

“Meta’s decision to permanently ban our account is an ‘existential threat’ to our company,” Brave Books founder Trent Talbot said in a statement following the account shutoff. “When I started BRAVE Books, I never would have imagined that picture books of cute talking animals who live on Freedom Island and teach kids about pro-God and pro-America values could ever be so controversial. Freedom Island is not so free anymore.”

“Parents need a way to instill the God-given values and truths this country was founded on in the most engaging way possible,” Talbot continued. “That is why we started the Freedom Island series, fun and engaging books with games and activities for the whole family that teach the values that made our country strong. Why does Facebook want to cancel that?”

Talbot told Fox News Digital his team cannot figure out what content triggered the ban, and insists that they have been careful not to violate any of the social media platform’s rules because Facebook is such a critical part of their marketing plan.

Brave Books shared with Fox News Digital the message Facebook sent the publisher confirming that their ad account had been “permanently disabled.”

The notice denying their appeal stated that the account “didn’t comply with [Meta’s] Advertising Policies or other standards,” but did not point to any specific violations. The message from Facebook stated, “This is our final decision.”

HAROLD FORD JR; WE ALL NEED TO TAKE A BREATH BEFORE WE CALL PEOPLE ‘WOKE’ OR WANT TO CANCEL THEM

Several hours after being reached by Fox News Digital for a response, a Facebook spokesperson declined to confirm on the record that Brave Books’ ad account had been suspended, but said “The account is currently active.”

In reaction, Talbot told Fox News Digital, “This is a prime example of big tech today. They shut down small companies who say anything contrary to their woke agendas. They may reinstate accounts only when they are hit with bad PR, only to throttle those same accounts to make them ineffective.”

“We’re fortunate we have a large enough platform to draw attention to their malicious ways but there are, no doubt, countless small businesses that have been abused and ruined by these types of actions,” Talbot added.

Brave Books has been through similar incidents before with tech platforms.

The publisher has partnered with several conservative lawmakers and high-profile figures that have served as authors: Rep. Dan Crenshaw, R-Texas, wrote “Fame Blame and the Raft of Shame” about cancel culture, and Jack Posobiec wrote “The Island of Free Ice Cream,” showing the dangers of communism.

But some Brave Book themes have sparked controversy, particularly their debut title, Ashley St. Clair’s “Elephants Are Not Birds,” addressing gender identity. The publisher told Fox News Digital that just two days prior to its now-reversed Facebook Ad ban, its SMS provider, Attentive, kicked them off the platform saying that “Elephants Are Not Birds” violated the company’s content policy.

Google suspended Brave’s ad account in May following the release of “Plot Against the King,” a book written by Kash Patel explaining the debunked narrative that Donald Trump represented a Russian asset in the 2016 election. Brave appealed the decision and Google reinstated the publisher’s ad account several days later.

GOOGLE TO FACE $25.4 BILLION IN DAMAGES BY UK AND DUTCH COURTS OF ADTECH PRACTICES

Google said at the time the suspension was “overturned following our standard appeals process.” Talbot said the account was restored “thirty minutes” after Fox News Digital reported the suspension.

Brave Books says the last ad it posted on Facebook before its suspension was promoting its latest book, “Fiona’s Fantastical Fort,” written by FOX News’ Julie Banderas, who has been with the network since 2005.

The ad shows Banderas discussing the book on Fox News Radio’s Brian Kilmeade Show. The text quotes Banderas as saying, “Every single book has a positive message. It’s like an anti-woke, pro-American, teaching morals, values, you know everything kids aren’t learning in public schools these days.”

Brave’s promotion also adds that “This month only, new subscribers will also get our very first book, ‘Elephants Are Not Birds.’”