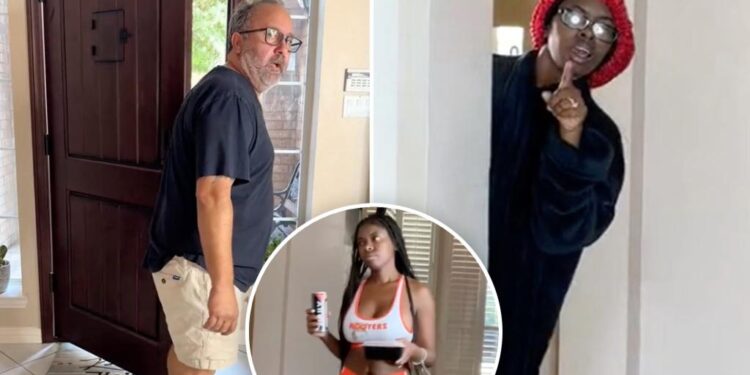 Well, she was happy to bust his chops.

Bosomy bride-to-be Sade hilariously thwarted her future hubby’s plans to enjoy the juicy bites and bouncing sights at Hooters — forcing the guy to eat dinner at home while she served him in a two-piece set inspired by the restaurant’s skimpy uniforms.

“This [man] think he’s about to go to Hooters?,” sneered the visibly vexed vixen in a viral TikTok.

In the clip, with a staggering 1.4 million views, Sade stops her fiancé, Joe, just as he’s headed out to the acclaimed chicken shack best known for its voluptuous waitresses in ultra revealing regalia.

“He ain’t going to no f- -king Hooters,” the tricky temptress mumbled to herself while stripping out of an oversized robe and hair bonnet. The unveiling showcased her hourglass shape, which was wrapped in a clinging white-and-orange Hooters bra and a matching pair of short-shorts.

The bombshell then walked over to a seated Joe — who’s nearly 30 years her senior — with a drink and a container of food, slammed it onto the table and said, “We got Hooters at home.”

Sade wrote “Tip me” in the caption of the post, punctuating her cheeky plea with the smiling-dollar sign emoji.

And social media spectators ate it up.

“She showed him. This was great,” cheered a commentator.

“I’d stay home every night for that,” another agreed.

Haters, however, were more interested in the engaged couple’s age gap rather than Sade’s Hooters hoax.

“That’s not your dad?,” penned a critic in the comments.

“We know why [they’re] together,” scoffed another, suggesting she snagged an older and seemingly well-to-do man for the benefit of his riches.

But online advocates, who also admitted to being in age-gap romances, applauded the pair for enjoying their love regardless of their generational differences.

“My husband and I are 23 years apart, married 13 years now,” bragged a digital audience member.

“My husband is 35 years older we’ve been married for almost 3 years,” another said.