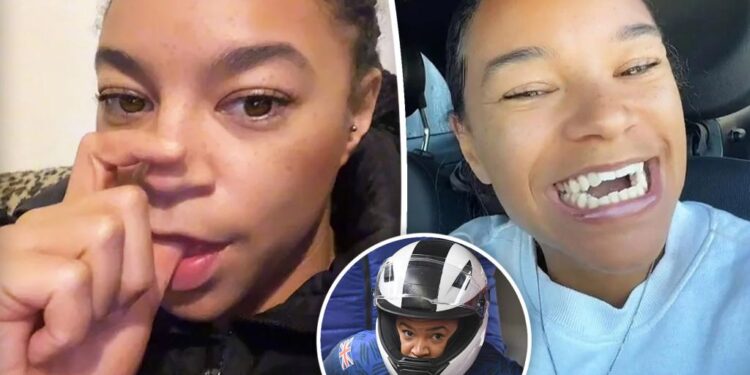 Thumb sucking is common in younger kids — but one woman proudly still sucks her thumb at 29.

This has made it impossible to bite into some foods using her two front teeth as it created a gap between her top and bottom teeth — but that hasn’t stopped the habit, with Moore cheerily showing herself instead using her incisors to chomp down on food.

Moore has posted several videos to her TikTok, answering commonly asked questions about her her pearly whites.

In one video she responded to followers’ questions, saying she doesn’t want to get braces and she’s happy with her smile the way it is.

“I love my fang teeth,” she quipped in a TikTok comment.

She also said her teeth haven’t affected any part of her life besides restricting some of the foods she eats.

“With my teeth health, I’m not in pain,” she said in a comment. “I can eat pretty much everything I want.. it’s just sometimes I use my tongue to support my bite.”

Although she’s constantly inundated with comments urging her to fix her teeth, many followers praised the Olympian for embracing her unique look.

“Damn these comments did not pass the vibe check. yall are for body positivity until someone is positive about themselves and then y’all hate on it,” one user pointed out.

Moore began her career as a sprinter and started bobsledding in 2017.

She competed in the 2018 Winter Olympics in Pyeongchang and finished eighth in the two-person bobsled event — the best in the British women’s Olympic bobsled team history.

She competed again in Beijing in 2022 and placed 17th.

According to the Mayo Clinic, it’s not uncommon for young children to suck their thumbs to comfort them and help them feel secure. Thumb sucking isn’t usually a concern until permanent teeth come in, and a lot of children stop sucking their thumbs on their own by 6 or 7 months or between the ages 2 and 4.

If children — or adults — continue to suck their thumbs it could cause major dental issues — affecting the roof of the mouth (palate) or how the teeth line up, depending on how long and how intensely someone sucks on their thumb.

Nitish, Lalu to meet Sonia today: Here’s all that may come up during the parley