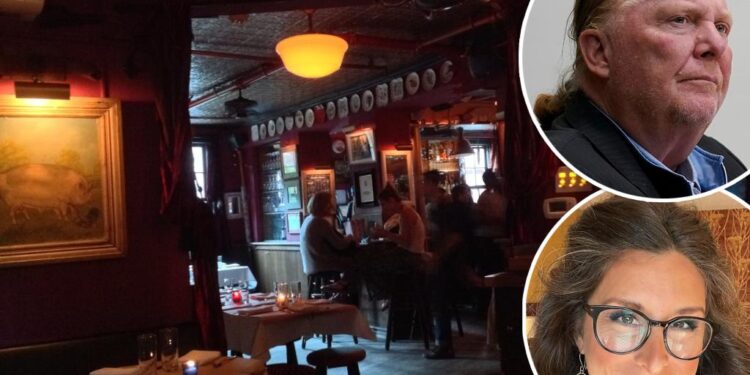 A woman who accused celebrity chef Mario Batali of sexual assault while unconscious is putting herself in the line of fire, identifying herself publicaly for the first time since the alleged traumatic event occurred in 2005, and detailing her harrowing experience.

One minute, Eva DeVirgilis, 43, said she was invited to an intimate dinner with Batali, her then boss, at the since-closed gastro pub The Spotted Pig in 2005. The next, she allegedly woke up on the floor of the restaurant’s private dining room. She recalls the alleged assault in a new documentary film “Batali: The Fall of a Superstar Chef,” the New York Times reported. It’s out Thursday on Discovery+.

The documentary comes a month after the disgraced chef settled two lawsuits in Boston with two women claiming Batali groped them in public in 2017. No criminal charges have been pressed against the former host of “The Chew” following the New York Police Department investigations into three potential assaults. Batali and his former business partner Joe Bastianich, who divested Batali over the ownership of the B+B Hospitality restaurant empire in 2019 which included the likes of Lupa and Italian food market Eataly among others, agreed to pay out a $600,000 settlement to more than 20 employees who claimed they were sexually harassed at their restaurants.

In the documentary, DeVirgilis, – who anonymously told part of her story on a 2018 segment of “60 Minutes” – shared the hospital report from the day after the alleged assault that showed bruised ribs and multiple abrasions with DeVirgilis claiming she may have been drugged,  The New York Times reported.

DeVirgilis, an aspiring actor who was 26 at the time, was reportedly working at Babbo full-time for a year at the time of the alleged assault where she managed the restaurant’s reservations during the day and hosted during evenings, she told The Times. She was excited and eager to work in the celebrity haunt, and her father was a fan of the Italian

“I was so naive,” she told The Times. “I knew not to walk across Central Park at night or to be alone in a stairwell. I didn’t know I should be afraid of my millionaire celebrity boss in a public place.” chef.

Batali and his lawyers did not respond to the film’s director, Singeli Agnew, according to The Times.

The night of June 3, 2005, DeVirgilis detailed, was like any other. Batali would often invite friends and employees to The Spotted Pig after hours where they gathered in the private room. DeVirgilis recalled being excited to get an invite to the Spotted Pig.

“I thought I would have a drink or two with the group, get on the subway and go home,” she told The Times. But when she arrived, the found Batali alone waiting for her with a limo and a bottle of Prosecco.

“He was married. He was my boss,” she said. “It wasn’t at all what I thought it was going to be.”

DeVirgilis, told the Times she remembered the chef refilling her wine glass, feeling tipsy and trying to call it a night, saying she had a 10 a.m. shift at his restaurant the next day. Batali allegedly told her to forget about work. The next thing she remembered was lying on a wooden floor in the restaurant with scratches on her body and what appeared to be semen on her clothing.

She remembered Batali aggressively kissing her, and she remember throwing up.

“In retrospect, that was the most chilling moment,” she told The Times of realizing she had been left in the restaurant and Batali hadn’t waited for her to sober up.

DeVirgilis told The Times she went home and to work the next day. When Batali called in and she asked him what happened the night before, he “tersely” told her to transfer him to the kitchen, according to The Times. She reportedly called a rape-crisis hotline and met with a counselor at Mount Sinai Hospital, where she was given a rape kit and doses of oral contraceptives and AZT antibiotics, according to a hospital report obtained by The Times.

“Patinet reports that she is unclear of following through with police report because her boss is a powerful person who can blacklist her from the industry,” the hospital report noted, according to the Times.

A lawyer for Batali did not immediately return the Post’s request for comment.