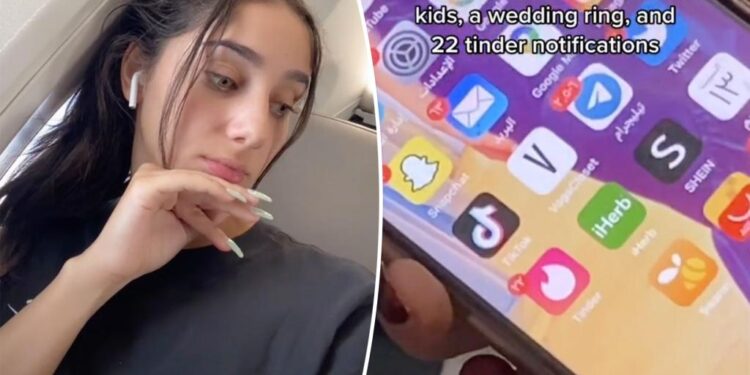 This plane passenger’s marriage may be making an emergency landing.

An unidentified woman with 22 Tinder notifications on her cellphone has been busted on board a flight — all while presumably sitting next to her husband and kids.

The naughty notifications were spotted by a fellow plane passenger named Karima, who filmed footage of the frisky phone screen and posted it to TikTok.

Karima’s clip quickly went viral, clocking more than 4.4 million views, with many speculating about the state of the mystery woman’s marriage.

“Watching a girl chilling on the plane with her husband, kids, a wedding ring, and 22 tinder notifications,” Karima captioned the clip, which showed her zooming in on the cellphone.

“Maybe they have an open marriage? I am confused,” the TikToker added, before hundreds weighed in with their theories.

“Her husband about to give her the biggest gift of her life: Divorce,” one person posited, believing that the woman was using the sex-and-dating app behind her man’s back.

Another chimed in, saying that the pair may have been hoping to spice up their marriage by being on the app together.

“Y’all don’t realize how many couples are on there looking for a third,” they stated, implying that the couple could be looking to open up their marriage.

The Tinder notifications appeared to be in Arabic, prompting some to respond in kind, saying their marriage definitely wasn’t open.

“It’s in Arabic, they don’t have no open nothing,” one declared.

Karima — who is believed to be based in Europe — didn’t disclose the route upon which she filmed the footage. She also made sure to conceal the woman’s identity.

Still, the TikToker received backlash from other viewers, who claimed it was inappropriate to be filming the Tinder-loving traveler.

Many claimed she couldn’t even be certain that the woman was married to the man (although she was wearing a wedding ring), while another simply snapped: “It’s none of your business.”