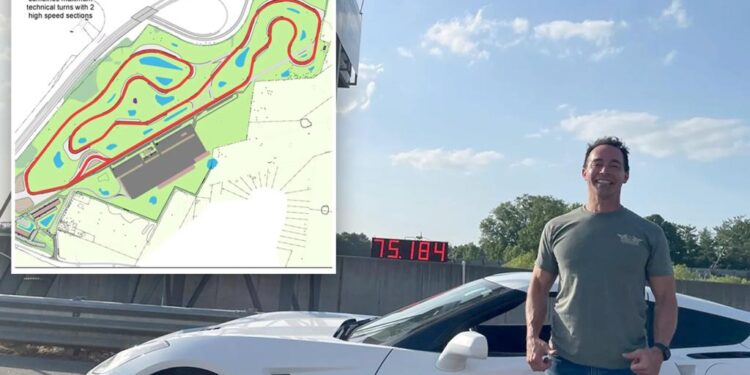 And you thought parallel parking for your driver’s license test was tough.

A Corvette owner has claimed the Guinness record for driving a mile the fastest … in reverse.

The auspiciously named Scot Burner completed the feat at the NCM (National Corvette Museum) Motorsports Park track in Bowling Green, Kentucky, just down the road from where his 2017 Chevrolet Corvette Stingray was built.

Based in Nashville, Tennessee, Burner hosts a YouTube channel called Always in Reverse that features him driving cars backward to see what their top speed is.

“It hasn’t caught on yet, but maybe this will get people interested,” he said.

He told Fox News Digital his unusual pastime started in 2000 when he purchased a Honda S2000 sports car.

“I had to back it up a long distance and was able to get it up to 47 mph. I thought, ‘well, that was fun,’ then I tried the cruise control and was surprised to find that it worked.”

Burner’s Corvette can hit 54 mph in reverse gear, but he did not just have to drag race backward for the record, which was set on June 15 and recently certified using video and data collected during the attempt.

The track does not have a mile-long straight section and the record requires the course to be flat or uphill, so he had to start at turn four and make his way through turns three, two and one onto the main straight, which runs downhill when going in the correct, clockwise direction.

Burner completed the course in 1 minute and 15.18 seconds at an average speed of 48 mph. The engine was up against the rev limiter for most of the run and smoking at the finish line, but did not suffer any mechanical failures. Burner beat the previous record of 1 min 37.02, which was set in the U.K. in a Nissan Leaf in 2012.

“I turn around with my right hand on the passenger seat, put my left hand on the steering wheel and look out the rear window,” Burner said of his technique.

“It’s twitchy and easy to spin out if you’re not careful.”

That is exactly what happened in the fastest car he has ever driven in reverse, which was a Kia Sorento rental that had a top speed of 56 mph and broken anti-lock brakes that sent him on a wild ride when he tried to slow down.

Fortunately, he was not injured and said he would be interested in going for the outright reverse top speed record, which has stood at 103 mph since 2002, but required a modified vehicle, as most cars have a much lower limit in their reverse gear.