Italy vs England – Start time, team news, and how to watch on TV 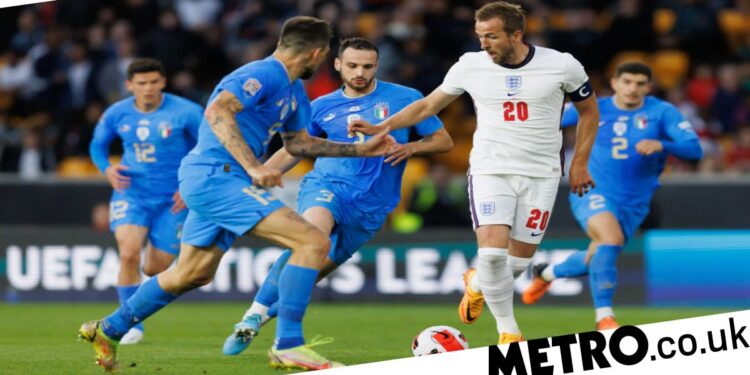 The Three Lions have had a wretched campaign this time around, with Gareth Southgate’s men currently propping up the group with just two points from four games.

This means that England are fighting to avoid relegation to League B, with the team three points behind Italy in third.

Here is what you need to know ahead of England’s Italian Job against the Azzurri.

What time does Italy vs England start?

The match will take place today (September 23) at 7.45pm UK time, with the game being held at the famous San Siro stadium in Milan.

How to watch the game on TV and live stream

The match will be shown live on Channel 4, with coverage getting underway at 7pm.

The game will also be available to live stream on All 4.

Live radio coverage of Italy vs England will take place on BBC Radio 5Live and talkSPORT.

What is the team news?

Southgate will surely look to field a team as close as possible to the starting XI he has in mind for their opening game of the World Cup against Iran.

That will mean the likes of Harry Kane, Raheem Sterling, Mason Mount and Bukayo Saka should start in attack, with Declan Rice likely to be in the centre of the park.

Harry Maguire has fallen out of favour under Erik ten Hag at Old Trafford, and will be sweating on his place at centre back despite strong performances for England over the last few years.

Southgate will have a decision to make over his right back starting berth, with Trent Alexander-Arnold, Reece James, Kyle Walker and Kieran Trippier all vying to become England’s first choice for Qatar.

A similar conundrum faces Southgate on the left hand-side of defence, with Luke Shaw and Ben Chilwell battling it out for the starting spot.

Jordan Henderson makes the squad after injury struggles for Liverpool, but Jordan Pickford will miss the game after remaining on Merseyside for treatment on a thigh injury.

Ivan Toney could make his England debut after being called up to the squad for the first time.