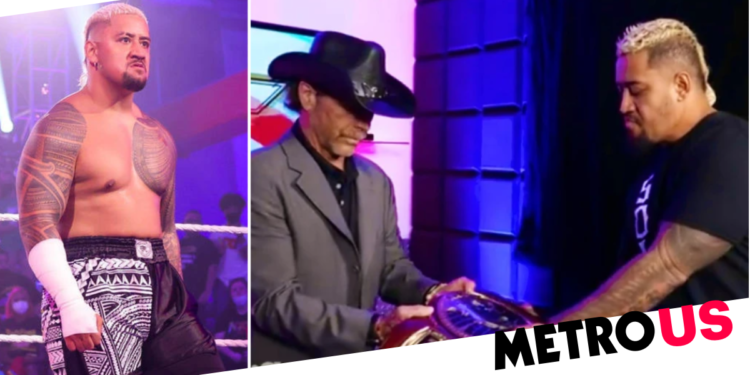 WWE superstar Solo Sikoa has been stripped of his NXT North American Championship after just one week with the gold.

On last week’s show, the newest member of the Bloodline – who now stands beside his cousin Roman Reigns and brothers The Usos on SmackDown – beat Carmelo Hayes for the title after Wes Lee won a fan vote but was attacked by Hayes and Trick Williams before the bout.

Sikoa took his spot and won the championship, defending it against Madcap Moss three days later on SmackDown, but his reign was cut short by NXT boss Shawn Michaels.

Addressing Sikoa and Hayes backstage, the Heartbreak Kid said: ‘You competed in a match you weren’t sanctioned to be in, you weren’t even a candidate for the fans to vote on.

‘Therefore, the result of that match cannot stand. I’m gonna need you to hand over the North American Championship. Sorry. I know, I’ve had to do it, and it sucks. But rules are rules.’

Sikoa insisted he understood the decision, but made it clear he put himself in the bout because he ‘just had some unfinished business’ in NXT.

HBK added: ‘I want you to know something. What you did here in NXT over the last year was staggering. Good look on SmackDown, Raw, wherever your WWE career takes you.’

Turning his attention to Hayes, the Hall of Famer insisted he wouldn’t be handing the belt back to the former champion, who would instead find himself in a high profile bout at Halloween Havoc next month.

He explained: ‘You want me to just hand this over to you? You tried to outsmart the system and you got burned! I don’t care if you’re cocky and arrogant, hell I even respect that.

‘But any time you think you’re bigger than the business, the business can slap you in the face – and that’s what it did.’

Now, Hayes will compete against four other men – decided by qualifying matches over the coming weeks – in a Ladder Match, with the winner taking home the gold.

WWE NXT airs Tuesday nights at 1am on BT Sport 1. NXT Halloween Havoc airs on October 22 at 1am on the WWE Network.