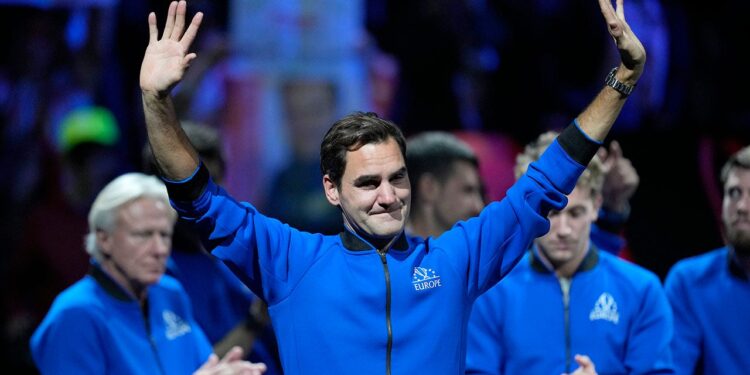 It’s the end of an era in tennis.

Roger Federer played his final match Friday night at the Laver Cup in London, losing a doubles match paired up with Rafael Nadal as part of Team Europe.

Both Federer and Nadal shed tears as the crowd gave the former a rousing ovation and he mouthed “Thank you.”

“It’s been a perfect journey,” Federer said after the match. “I would do it all over again.”

The 41-year-old announced his retirement last week, citing injuries over the last few years slowing him down.

“As many of you know, the past three years have presented me with challenges in the form of injuries and surgeries,” Federer said. “I have worked hard to return to full competitive form. But I also know my body’s capacities and limits, and its message to me lately has been clear. I am 41 years old. I have played more than 1,500 matches over 24 years. Tennis has treated me more generously than I ever would have dreamt, and now I must recognize when it is time to end my competitive career.”

Federer spoke with the crowd following the match, taking it all in one final time.

“It’s been a wonderful day. I told the guys I’m happy, I’m not sad. It feels great to be here. I enjoyed tying my shoes one more time. Everything was the last time,” he said.

Team Europe is blessed to have the top three grand slam winners together: Federer, Nadal (22), and Novak Djokovic (21).

“It’s been wonderful. And, of course, playing with Rafa on the same team and having the guys, everybody here, all of the legends … It is amazing. It really is,” Federer said.

“It does feel like a celebration to me,” he added. “I wanted it to feel like this at the end, and it’s exactly what I hoped for.”

Federer spent 310 weeks as the top-ranked tennis player in the world and retires with 20 grand slam titles, the third-most all time. His titles: eight Wimbledons, six Australian Opens, five U.S. Opens and one French Open.

Albert Pujols on 700th home run baseball: ‘Souvenirs are for the fans’