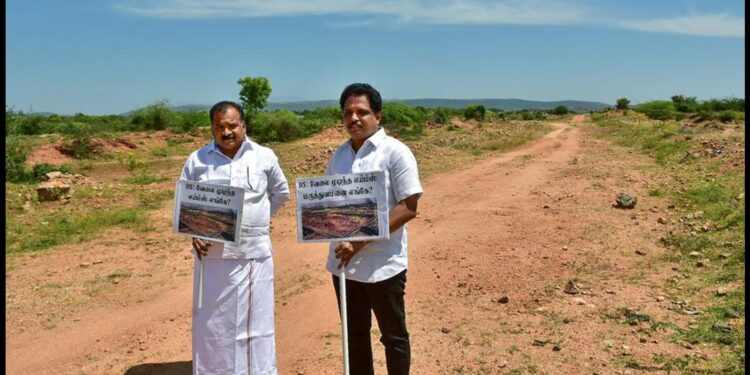 Virudhunagar MP Manickam Tagore and Madurai MP S Venkatesan on Friday slammed Bharatiya Janata Party (BJP) president J P Nadda, and held placards at the site where he said 95% of work at AIIMS in Madurai is complete. The parliamentarians held up a placard each with a photo of the empty site accompanied by a Tamil caption “Where is the AIIMS, which is 95% complete?”

Nadda, who is on a two-day visit to Tamil Nadu, while speaking to industrialists in Madurai on Thursday, said ₹1,264 crore was allotted for the AIIMS project.

“Today, 95% of the work of the All India Institute Medical Sciences has been completed,” Nadda had said.

Congress MP Tagore in a series of tweets directed at Nadda said that he and the Communist Party of India (Marxist) or CPI (M) MP Venkatesan searched the site at Thoppur for an hour and found nothing.

“Someone has stolen the building,” Tagore said. “This is the site,” Tagore said in a video recording, pointing toward a vacant plot.

Venkatesan further said, “Wondering if 95% of the work was completed by bulbul birds.”

The remark was a reference to a recent controversy in Karnataka, where a chapter in a Kannada Class 8 textbook said that when Savarkar was jailed in the Andamans, there wasn’t even a keyhole, but bulbul birds visited him.

“Even ten days ago, I spoke to a health official from the union ministry to ask about the status of the project. Every month I speak. It’s my job,” said Venkatesan. “Tagore also inspected the site last week, and no work had started.”

Reacting to the allegations, Nadda said, “Just now, when I came I was told about the videos of AIIMS which I spoke about yesterday,” Nadda said, adding that Tamil Nadu BJP president K Annamalai will answer those questions with facts.

“I need not answer those questions. But, I request you, please have educated leaders…who can understand what pre-investment survey, what type of investments…I told yesterday, an additional amount of ₹164 crore was added for AIIMS…Have educated leaders in Tamil Nadu so they can at least respond to things which I say.”

Tamil Nadu BJP’s vice president, Narayanan Thirupathy, also took to Twitter and said that Nadda was misquoted. “He said that 95% of work towards the start of construction is completed and also said the construction will soon begin,” Thirupathy said.

The AIIMS in Madurai has been a subject of critique due to its inordinate delay.

Dravida Munnetra Kazhagam (DMK) president M K Stalin, while campaigning before he was elected chief minister last May, had said that though the BJP-led Union government had announced AIIMS Madurai in 2014 in the Parliament, Prime Minister Narendra Modi ‘hastily’ laid the foundation for the project only in 2019 ahead of the general elections and has been in limbo since.

Stalin’s son’s Udhayanidhi, a first-time MLA, during campaigning in Virudhunagar district last March, held up a brick that had the letters AIIMS written on it. “Do you remember three years ago, AIADMK and BJP started building AIIMS in Madurai? I’m coming from campaigning in Madurai and I’ve brought the AIIMS they built into my hands. There was only one brick, so I brought it along with me,” Udhayanidhi had said last year.

Meanwhile, speaking to reporters on Friday, Nadda said that he finds a huge surge in favour of the BJP in Tamil Nadu. “DMK government is not working in the spirit of cooperative federalism. They believe in the blame game,” Nadda charged. “They should have educated leaders. They should understand… What is the state subject, what is a central subject, what is a concurrent subject.”