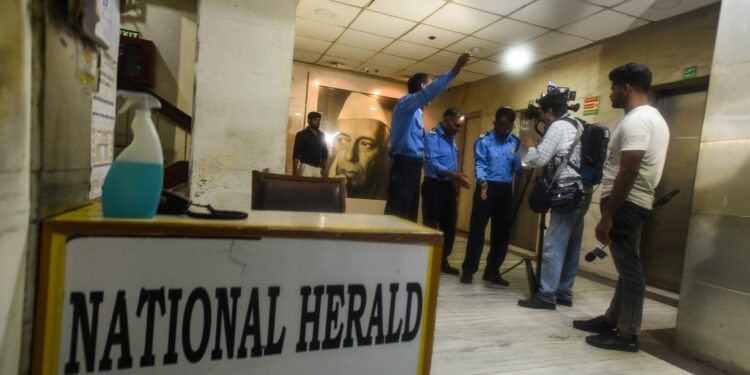 The Enforcement Directorate (ED) on Friday issued notices to at least five Congress leaders in Telangana in connection with a money laundering case linked to the National Herald newspaper, agency officials said.

The notices were served under section 50 of Prevention of Money Laundering Act, 2005.

The case relates to alleged financial irregularities in the party-promoted Young Indian (YI), which owns the National Herald newspaper. ED registered a new case under the criminal provisions of Prevention of Money Laundering Act (PMLA) after a trial court in Delhi took cognisance of an Income Tax department investigation into Young Indian Pvt Ltd on the basis of a private criminal complaint filed by Bharatiya Janata Party (BJP) MP Subramanian Swamy in 2013.

The ED suspects the five Telangana Congress leaders transferred huge amounts of money to the accounts of companies involved in the National Herald case, a party leader privy to the matter said on condition of anonymity.

When contacted, Geetha Reddy said she has not received any notice from the ED so far. “I will be able to speak when I get the notice,” she said.

Shabbir also denied receiving any notice in the case. He said he will respond to the notice appropriately whenever he receives it.

“I have not done anything wrong, as everything is transparent,” he told a local news channel.

One of the leaders who was issued the notice told HT that several people had given donations to the National Herald Trust but only through cheques.

“I have made contributions to the National Herald from my own sources of income and everything is on record. There is nothing to hide,” the leader said, wishing not to be named.

“We are not like the ones who had made huge money while in the party and then deserted it when it was in trouble. It is obvious that the Centre is trying to trouble us for being fair and transparent,” the leader added.