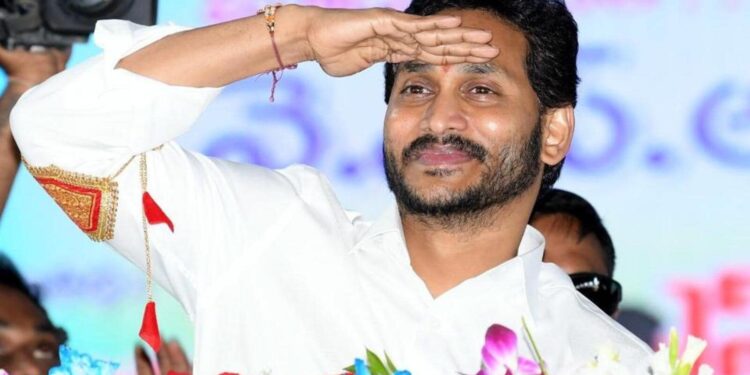 HYDERABAD: YSR Congress party president and Andhra Pradesh chief minister YS Jagan Mohan Reddy on Friday asked voters of Kuppam assembly constituency in Chittoor district to defeat sitting MLA and Telugu Desam Party (TDP) president N Chandrababu Naidu in the next elections, promising them that this will lead to a massive development push in the constituency.

Jagan Mohan Reddy was on a visit to Kuppam, the assembly segment in southern Andhra Pradesh that has voted Chandrababu Naidu in all seven elections held since 1989. This was Jagan’s first visit to the Naidu bastion in Chittoor district.

Jagan’s party leaders believe the YSR Congress has been able to dent the TDP’s support base on this seat. In the local body elections held last year, the YSRC captured the Kuppam municipality, winning 19 of the 25 wards., apart from 75 of the 89 gram panchayats, 62 of 65 block parishad seats and all four zilla parishad seats in the constituency.

“People of Kuppam have reposed their faith in the YSRC by voting for the Jagan government which is implementing welfare schemes and against the TDP, which believes in looting. They taught a lesson to Naidu for cheating the backward classes,” Jagan said, addressing a public meeting after disbursing financial assistance to weaker sections under the YSR Cheyutha scheme at Animiganipalle near Kuppam.

He said Kuppam has a large population of the other backward classes (OBCs) and hence, they should represent the seat. “But Naidu, who doesn’t believe in social justice, has grabbed this seat from OBCs. He always adopts a use-and-throw strategy towards OBCs,” he said.

Jagan said his party counts the backward classes as the backbone of society, and this was the reason why all schemes implemented by his government were aimed at uplifting the OBCs. “If the people of Kuppam elect local OBC leader of YSRC KRJ Bharat as the MLA in the next elections. I will make him a minister and see that Kuppam is developed on all fronts,” he said.

Already, he said, his government has taken up various programmes for the development of Kuppam over the last three years that resulted in tangible development in every field. He also announced the hike in pension to ₹2,750 from ₹2,500 from January and said it will reach the promised figure of ₹3,000.

He said that a weeklong Cheyutha festival would be held at Kuppam and the elected representatives will visit each house at mandal level.

Jagan said for the third consecutive year, 26.39 lakh beneficiaries received the pension of ₹4,949 crores directly into their bank accounts. In all, the government has given ₹3.12 lakh crores under DBT and non-DBT of which ₹2.39 lakh crore was given only to women.

Chandrababu Naidu hasn’t commented on Jagan’s new offensive in his backyard but his party launched a sharp counterattack, underlining how severe restrictions were imposed on people during Jagan’s visit.

“Look at the way the restrictions were imposed by the police in Kuppam during the chief minister’s visit. Schools were closed, shops forced to down shutters, RTC (state-run transport corporation) suspended its bus services and people from different parts of the district were forcibly shifted to his meeting, fearing the locals won’t attend his meetings,” senior TDP leader and former MLA Dhulipalla Narendra said.

He said if Jagan really had the support of residents, there wouldn’t have been so many restrictions. This was never the situation when Naidu toured any constituency as chief minister, he pointed out.

Narendra said that contrary to Jagan’s claims, Chandrababu Naidu contested from Kuppam because the TDP was the party of the OBC and Naidu enjoyed their massive support. “While Jagan contests only from Pulivendula dominated by his community and his group, Naidu chose Kuppam, where he had no backing of his community,” he said.