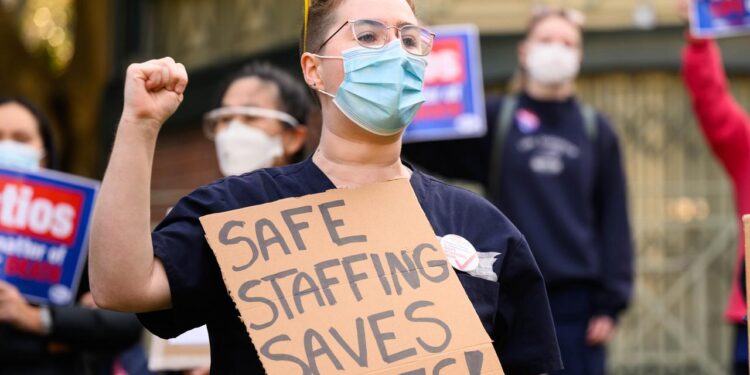 Labor promised on Wednesday it would introduce “safe staffing levels” if it wins the March state election, hiring 1200 more nurses and midwives on top of a government promise to hire 10,048 extra staff.

The policy announced by Labor leader Chris Minns would introduce “minimum and enforceable safe staffing levels” through the industrial award.

It’s a step short of the legislated nurse-to-patient ratios that the NSW Nurses and Midwives’ Association has campaigned on, but union leaders nevertheless appeared pleased.

“NSW Labor’s safe staffing levels proposal will help to address the widespread workforce problems in the health system, and it’s certainly a lot closer to what’s needed compared to anything the NSW government has offered to date,” NSWNMA assistant general secretary Michael Whaites said in a statement.

Albury nurse and NSWNMA member Geoff Hudson said it was a step in the right direction.

“It‘s going a long way towards getting what we asked for,” Mr Hudson told NCA NewsWire.

“It would make a big impact where I work, but at the same time, it doesn‘t go the whole way.”

Mr Hudson said that as a nurse working on the NSW-Victoria border, his colleagues in the neighbouring states had a better deal.

“If I move to Victoria, which is a couple of kilometres away, I’d be paid substantially more, and they already have ratios too,” he said.

He pointed out some other “glaring omissions” as well, saying there was no plan to up staffing ratios in paediatric wards and no telling what the timeline would be.

“If we‘re going to have to wait eight years for it, that’s still a huge problem,” he said.

“We need details of the timeframe.”

Greens MP Cate Faehrmann was critical of the announcement.

“This is a big deal when Victoria and Queensland both have legislated ratios across all wards in public health facilities because we know that nurses are leaving NSW to work in those states in droves.

“It’s also disappointing to see Labor back away from their promise over two elections now that they’ll introduce mandated minimum nurse and midwife-to-patient ratios. The last thing our struggling public healthcare system needs is half measures when it comes to reform.“

Mr Minns said the NSW health system was in need of “structural repair”.

“These changes will see more health staff retained, working in areas that need them the most, and it means better outcomes for patients and the level of care they will receive in NSW,” he said.