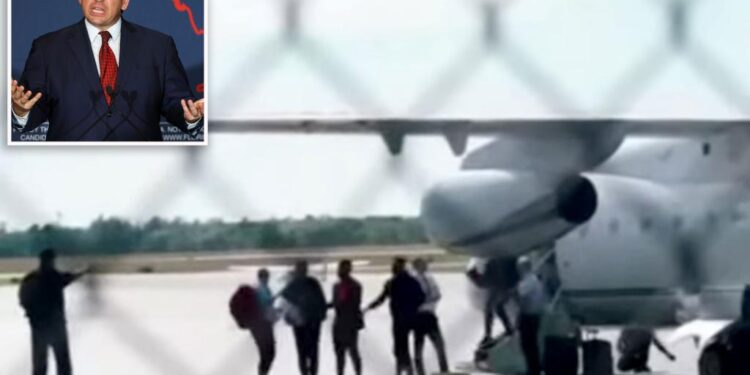 Florida Gov. Ron DeSantis slammed and questioned the origins of a lawsuit filed against him by Venezuelan migrants who claimed they were lied to when they boarded planes to Martha’s Vineyard last week.

DeSantis’ spokeswoman Taryn Fenske told The Post in a statement the Tuesday suit amounted to nothing more than “political theater” put on by “opportunistic activists.”

The suit, filed in federal court in Boston, alleges DeSantis engaged in a “fraudulent and discriminatory scheme” to relocate the migrants to the exclusive Massachusetts island.

“If these activists spent even a fraction of this time and effort at the border, perhaps some accountability would be brought to the Biden Administration’s reckless border policies that entice illegal immigrants to make dangerous and often lethal journeys through Central America and put their lives in the hands of cartels and Coyotes,” Fenske said.

The migrants allege in the suit they were duped and told they were being sent to Boston or Washington D.C. — not the posh liberal enclave off Cape Cod.

They were lured into the travel with small perks, like $10 Mcdonald’s gift cards, the suit alleges.

“No human being should be used as a political pawn,” said Ivan Espinoza-Madrigal, executive director of Lawyers for Civil Rights.

The Boston-based organization is seeking a class-action status in the suit, filed on behalf of several migrants who were among the roughly 50 who boarded flights to Martha’s Vineyard last week.

“In or around September 2022, Defendants and their unidentified accomplices designed and executed a premeditated, fraudulent, and illegal scheme centered on exploiting this vulnerability for the sole purpose of advancing their own personal, financial and political interest,” the complaint states.

The complaint says DeSantis and his transportation secretary Jared W. Perdue “made false promises and false representations that if the individual Plaintiffs and other class members were willing to board airplanes to other states they would receive employment, housing, educational opportunities, and other like assistance at their arrival.

“Once the individual Plaintiffs and class members landed, it became clear that the promises made to induce them on the planes were in fact bold-faced lies,” the suit alleges.

Migrants filled out a consent form that was given to them before they boarded the plane, according to Fenske, who provided a copy of the document to The Post.

The form, available in both English and Spanish, says: “I agree to hold the benefactor or its designed representatives harmless of all liability arising out of or in any way relating to any injuries and damages that may occur during the agreed transport to locations outside of Texas until the final destination in Massachusetts.”

Democrats have echoed claims that the migrants were misled, with many calling for federal authorities to investigate further.

On Tuesday, the sheriff of Bexar County, Texas, which includes San Antonio, opened an investigation into whether the migrants who boarded the flights were victims of a crime.

DeSantis has ripped the hypocrisy of his critics being more outraged at him flying a handful of migrants to Martha’s Vineyard than when border crossers die in terrifying conditions.