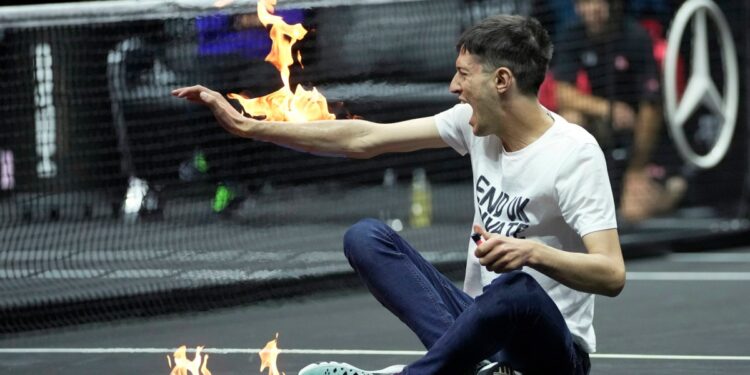 A man set his arm on fire on the court Friday during a tennis tournament in London to protest the use of private jets in Britain.

Stefanos Tsitsipas of Greece was playing Diego Schwartzman of Argentina in a Laver Cup match at the O2 Arena when the unidentified man stormed the court while wearing a T-shirt that read “End UK Private Jets.”

The Swiss great Roger Federer was due to take to the court later in the day for the final match of his career, with the 41-year-old partnering with Rafael Nadal of Spain to face the American duo of Jack Sock and Frances Tiafoe.

He was carried off the court by three security guards before the game resumed, cellphone video showed.

“A man accessed the court this afternoon and was promptly removed by security,” an official with Laver Cup said.

The official said the man has since been arrested.

This is a developing story. Please check back for updates.