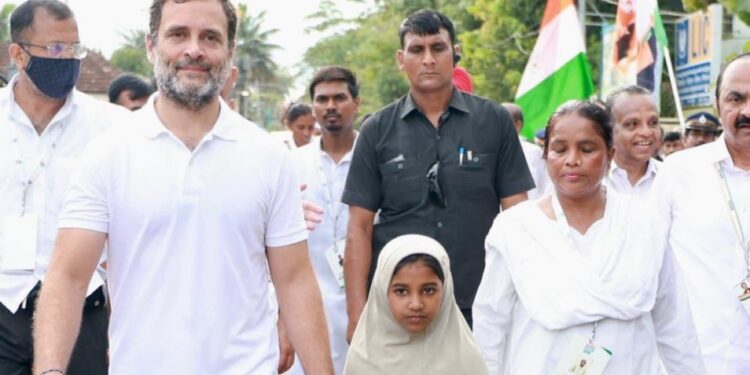 A fresh row was stoked after BJP’s Sambit Patra on Tuesday posted a photo of Congress leader Rahul Gandhi with a hijab-clad girl during the Bharat Jodo Yatra and called it an appeasement stunt amid the hijab row. The photo was originally posted by the Congress on September 19. Sambit Patra shared the photo on Tuesday and wrote, “When votes are accounted for on the basis of religion… then it is called appeasement.” Congress leaders tore into him and asked BJP to look beyond people’s faith.

Is there no low to which BJP spokesmen won’t sink? She is a little child & too young to be part of any vote bank: please spare her from your small-mindedness! What @RahulGandhi is doing is a simple decent gesture towards a kid. BJP, learn to look beyond people’s faith; we do. https://t.co/y4WiXJTCkA

Thiruvananthapuram MP Shashi Tharoor who is likely to contest the party’s presidential election said Rahul Gandhi’s gesture is just a decent one towards a kid. Asking BJP to learn to look beyond people’s faith, Tharoor said Congress does not look at people through the prism of religion. “Is there no low to which BJP spokesperson won’t sink? Tharoor said. “She is a little child and too young to be part of ant vote bank. Please spare her from your small-mindedness!” Tharoor tweeted.

Congress spokesperson Supriya Shrinate chastised Sambit Patra and said, “Sambit, I have not seen a worse person than you in my entire life. You did not even spare a kid. It is one thing to be rattled by the huge crowds in the Bharat Jodo Yatra, but to be blinded by hate like this. You are the pits!” Jairam Ramesh retweeted Supriya’s comment and wrote, “Worse than the pits”.

Congress leader Pawan Khera said those who divide people based on their clothes are not desh-bhakts — they are only ‘Modi-bhakts’. “Found the divider of India,” Pawan Khera tweeted.

Swaraj party founder Yogendra Yadav posted a collage of photos Rahul Gandhi took on his yatra — to show the range of religion and wrote that people with poor eyesight can wear surma to see better.

Who’s Getting Married? What to Know About ‘Never Have I Ever’ Season 4